We recently had the pleasure of sitting down with Nick Crabbs, partner and founding member of Vynyl to discuss his thoughts on virtual reality, augmented reality and future of the industry. Vynyl is a product development firm that works with corporations, institutions, and investors to build unique mobile, web, VR & AR applications that are technically excellent, visually appealing, and create real & measurable business value. Prior to his work with Vynyl, Nick spent nearly a decade working for some of the nation's largest banking institutions, local municipalities, and large enterprise environments as an IT specialist and manager. Morphing into a serial entrepreneur and community tech evangelist Nick has worked with several start-ups and local community organizations leveraging his knowledge and expertise in technology, management and recruiting to judge events, offer mentorship, speak on panels, and contribute to a growing tech scene. Nick is currently co-chair of Boise Startup Week. Let’s jump right into what Nick had to say:

How did you get started in the technology space?

My father was a software engineer. He worked for NASA, Coca Cola, Hughes Aircraft and many other household names. So, I got started coding - web pages and all that entails, but also C++ - when I was 11 years old. I also got several computers, in pieces, of course, and learned how to assemble them. Assembling high-performance computers is still something I enjoy. Once I made it into Meridian Technology Charter High School, though, I really dug in and started taking my hobby more seriously and considering it as a possible career choice. The rest, as they say, is /linkedIn history...

What do you think are the biggest challenges for businesses in this space?

The most valuable things we do for our clients all involve strategy and aligning execution behind that strategy. Whether you are a startup or a large company, deciding what to build and how to bring it to your users is the hardest thing. We facilitate design sprints and research sprints to help our clients discover what their users want or how to attack a particular problem and we’ve seen really great return on those efforts. We’ve even told people not to launch a product, because it wasn’t going to find a market. They were a little surprised we appeared to be telling them not to give us more money - and that’s exactly what we were telling them! But then we did other stuff with them that was very successful and they know now they can always trust us to be straight shooters.

My advice is evergreen, almost no matter the question: create structure to channel and prioritize efforts, seek advice from real experts, build minimum viable prototypes and get to market with real customers as quickly as possible. 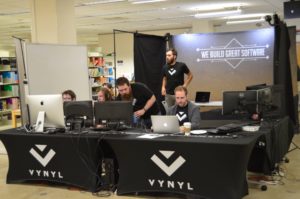 Well, in the 2017 Gartner Hype Cycle that just came out, AR is in the “Trough of Disillusionment” while VR is on the “Slope of Enlightenment”. So, I think they are very distinct and in distinctly different places. VR seems like a stable base to build a business or initiative on these days, in a way it never really did before. The hardware is there and there is just a lot of great content already here and also coming down the pike.

I think there are still terrific opportunities for content creators that are focused on launching worthwhile experiences for VR. The game stores are all about that content and the big guys are coming up fast - Bethesda’s announced Skyrim/Fallout VR at E3 this year.

AR feels to me like the place where real change is going to be happening, though. Apple and Google are in with enabling technologies and the first companies, like Ikea and Amikasa, already have apps that let you experience your space in novel and valuable ways. And while there are some cool AR games, the real way this is all going to become part of our everyday is via things like inkHunter, Sun Seeker, SkyMap, SketchAR, and Theodolite.

We still have to solve the holding-your-phone-in-front-of-your-face-like-an-idiot problem, but lots of smart people are working on that. Content creators can just consider it done and get themselves ready ready for the AR push by developing their thinking and expertise around the “how” and “why” of AR.

I think the only way to answer that is: controllers/input devices and headsets.

Improvements to the physical experience in VR, especially higher-end VR, are starting to percolate. Valve's Knuckles controller for SteamVR were just an idea 18 months ago - sketches and thoughts about how to improve the experience. Now there are several innovations and product on the way, and that’s just in the finger tracking space. The new beacon technology is also going to change the game. Literally, in some cases. Whoever figures this out first and best and gives us tools to interface “naturally” with the environment is going to make a big difference to VR and to their own bottom line.

Saying I’m looking forward to headset improvements is also a no-brainer. None of us really wants to be a glasshole, but we definitely do want to have a world where all our interactions and activities are supplemented with information and experiences on top of the merely real. That’s what I want and I’ll patiently wait the 3-5 years it’s going to take to get there. Nick at the Boise Vynyl office.

What type of service or product does your company offer to businesses in the VR space?

Vynyl’s tagline is “High-Fidelity Software and Design”. We build excellent software for our terrific clients and help them to decide what and when to build. Our VR/AR clients are no exception. I wish I could tell you about them, but they are all pre-launch and under embargo. I’ll have great stories next time!

In general, though, VR/AR projects have the same needs as any project: build the right thing for the right money as quickly as possible and then get feedback.

What cool projects are you guys currently working on? What industries?

In the past 5 years we’ve easily had 100+ clients from large fortune 500, medical, universities, government and startups. You name it, we’ve probably done it.

Personally, there are a couple types of projects that get me the most excited.

Our partnership with UCSF and Quest Diagnostics to improve diagnosis for alzheimer's and dementia is a huge project and a ton of fun. It’s great to wake up in the morning knowing that you are working on things that improve actual lives in the real world.
Snocru is the world’s leading snow sports tracking app. It was/is a large and challenging project. All that effort paid off with both google play and apple’s app store features 2 years in a row.
Scoutables. Anytime you get to do big data and baseball at the same time, it’s going to be fun. Working with luminaries like former dodgers GM Fred Claire and analytics guru and pitching legend Orel Hershiser and the head of IBM Watson Analytics we get to crunch millions of points of baseball data and learn real world things about the game that only big data analytics and an IBM super-computer could find.

We are very fortunate to have Vynyl and Nick Crabbs as part of the IVRC community! If you would like to connect with Nick you can find him on LinkedIn here.