In the first half of the nineteenth century, Henry David Throueau coined the famous quote “The world is but a canvas to our imagination.” Now, that canvas is getting bigger with the recent introduction of virtual and augmented reality technologies geared toward the arts.  Despite the increasing number of VR works created by professional artists, the art community and public in general are largely oblivious to virtual reality as a legitimate form of artistic expression.  To combat this lack of awareness, the Boise Art Museum and the Idaho Virtual Reality Council joined forces to offer the attendees at BAM’s 80th Anniversary Gala a first-hand look at this new immersive art medium. In the corner of one of BAM’s galleries, local Triennial artist Thomas Finnegan equipped with an HTC Vive headset used two controllers to create an original three-dimensional work.  The controllers doubled as a brush and pallette, and with each swipe of the hand the virtual space, which was blank moments before, became filled with contrasting strokes of flat grays and pulsing bursts of light.  Finnegan only began experimenting with the VR application Tilt Brush several months before the event in his studio.  However the learning curve is minimal, and as a result it didn’t take long for him to acclimate to his three dimensional canvas. 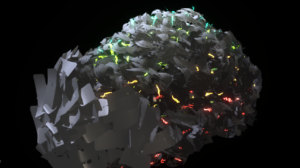 During the Gala, Finnegan started from scratch, creating his VR art experience over the course of the evening.  Attendees, dressed in formal attire, mingled as they watched his piece come to life on the gallery wall via projector.  Unfortunately the flat wall didn’t do the three dimensional work justice, and at first patrons had a difficult time conceptualizing what the artist was actually creating.  But as the event wore on, more and more people pulled the Vive headset over their perfectly manicured hair and were blown away by the experience before them.  For a brief moment they were transported into the painting.  They could walk around it, under it, into it, and is some ways they became a part of the experience themselves.  People laughed, smiled, and encouraged their friends to give it a try.  At one point an attendee walking towards the gallery was asked “Have you seen the VR art yet?”  He replied, “I’m headed there now.  I heard it’s the shit!” The experience raised many questions about the technology, and how it could be utilized outside of art and gaming.  IVRC team members explained to attendees that virtual museums already existed where viewers could interact with famous pieces of art from the comfort of their living rooms, and that museums around the world were already using the technology to offer their patrons more interactive and immersive experiences.  Virtual reality also has the added benefits of allowing museum goers the opportunity to get closer to famous pieces of art.  Instead of standing in a crowd staring at the Mona Lisa from 20 feet away behind roped barriers, you could observe it from inches away.  Or, imagine seeing a painting and wanting to be in it, well with VR you can.  This has already been done with Vincent Van Gogh’s Starry Night, and it’s magnificent.

By the end of the evening it all started making sense for those attendees that experienced virtual reality.  A clear connection could be drawn between art and VR.   Although there will always be a place for traditional forms art, virtual reality as a new art medium will only continue to gain popularity as the technology becomes ubiquitous in the coming years.